Laser Lipolysis (liposuction) is the process of aspiration made through the small incisions with the help of special cannulae attached to the vacuum pump of subcutaneous adipose tissue by protecting the vascular and nerve structures. Laser lipolysis surgery (liposuction)  is one of the most popular today, but one of the most misunderstood operations in terms of its effectiveness and surgery indication. Liposuction surgery (liposuction) is not a weight loss method after surgery, but to tighten and help tighten, help contouring body lines. 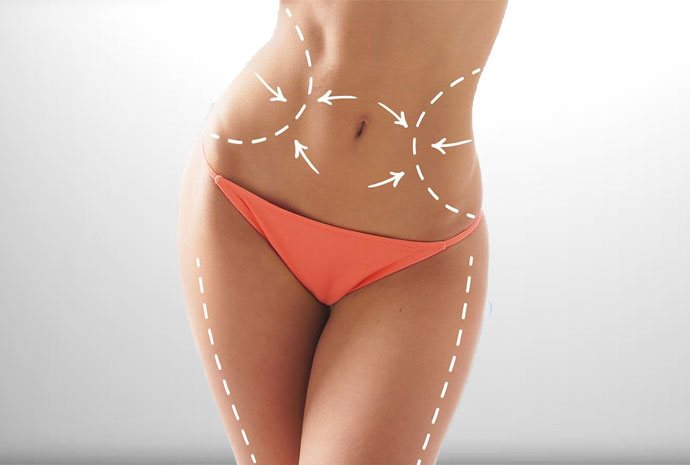 If you have excess weight, unfortunately, this surgery is not for you. With liposuction surgery, regional slimming and contour correction are carried out. The most suitable candidates for liposuction surgery (3D laser lipolysis surgery) are those who have regional excess and young or middle-aged patients and the surgery indication is needed to be diagnosed correctly.

In 3D laser lipolysis surgery, although personal factors play a role in the definition of beauty, the concepts of common for everyone living in the same culture can be identified. The prominence of the “open-S-curves” in the female figure contributes to beauty. People are affected by the harmony created by these curves. In females, a concavity in the waist area and convexity in the buttock area are prominent, whereas, in males, these lines are flatter.

The aim of liposuction surgery (liposuction, 3D laser lipolysis surgery) is to create the concept that we call open S curves or to be close to this appearance.

Skin laxity (independent from the age)
Cellulite (we don’t apply laser lipolysis for the treatment of cellulite with the latest technology, but patients with normal liposuction cellulite may not give the desired results)
Marks due to weight changes

What Should Be Done Before Laser Lipolysis (Laser Liposuction) Surgery?

If you want to get maximum results from liposuction surgery (3D laser lipolysis surgery), you should start realistic and the most suitable diet for you at least 2 weeks before the surgery and do exercises if possible. By doing this, you can get more effective results in the postoperative period by regulating the body’s fat metabolism.

After you enter the operating room with a great excitement for 3D laser lipolysis surgery when your surgery ends and you go through a phase of awakening; the first thing you will experience after feeling yourself is the pressure effect in the operation area. Do not be afraid when you feel this. The reason of this effect is the corset integrated into your body between 2-6 months. When you realize that this effect is caused by the corset, you will begin to feel very little pain in the areas of application and painkillers will be given for this pain.

If you feel good after removal of the effects of narcosis from the body (average 6 to 24 hours), you may be discharged from the hospital. In general, the average duration of stay in the hospital after 3D laser lipolysis surgery is for 12-48 hours.

On the 1st or 2nd day after the discharge from the hospital, we invite you to our clinic for dressing, and when you take off your corset, you will see small incisions that vary according to the region and its maximum size does not exceed 0,5 cm. The other thing that will draw your attention is the bruises at variable rates depending on your skin sensitivity. All these bruises and incision areas disappear completely within 30 days. (There is no rule that these bruises will occur in each patient and the average recovery period of these bruises according to your skin structure is 2-4 weeks.)

After the dressing is completed, you will wear your corset again and you will not take off it for 1 month. In some application areas, this period may increase or decrease. The reason you are wearing a corset and will not take off it is to ensure the adhering of the space caused by the removal of adipose tissues from your excessive areas to the skin.

Within 6-month period after liposuction surgery (liposuction, 3D laser lipolysis surgery), your oedema will decrease rapidly and your body lines will begin to become apparent, and you will see these effects from the 1st month.

To summarize the recovery process of fat removal with liposuction:

When I write this section, my aim is not to scare you, but to give you awareness and to convey you the right information in every way.

The complication is a situation that every surgeon faces, and the important thing is the attitude to be adopted when faced with such a case. For this reason, you should always discuss to your doctor about all the details before the surgery and ask for everything that comes to your mind.

The more fat aspirates are removed, the more the amount of fluid and blood is lost from the body. For this reason, when the average of 3-4 litres of fat aspiration is done, you may need to take blood and plasma supplements from the outside. In this case, your stay period in the hospital will be longer.

Excessive sensitivity or vice versa loss of sensation may occur in the area of application. This situation disappears by itself in 3 months and is not exactly a complication.

There may be a slightly uneven surface and dimpling in the application areas, and it is minimized by the use of corsets. But if these uneven surface are replaced by deep pits and dimples, unfortunately, in order to correct this situation, you will have to be operated for a second time, preferably within 6 months -1 year.

Hematoma due to bleeding in the applied area and associated water retention, and long-lasting bruises. This situation can be corrected and prevented by the early intervention of your doctor.

The asymmetry may occur in the area of the application, a surgical procedure may be required to correct this case.

With the development of technology, a lot of methods have been developed to help the liposuction surgery providing more fat removal in a much shorter time.

Some of these methods are;

The difference of the laser lipolysis from liposuction is that a joule heat is given to the application area by a laser beam before starting liposuction. This heat causes the liquefaction of the fat cells and causes the immobile and intractable fat layer to be opened/activated in the lower layer. After providing this effect, liposuction is started. In this way, the vacuum procedure is performed in a much shorter and more effective way.

Laser lipolysis is the most effective method in the treatment of patients who had liposuction surgery before and whose uneven surface and pits haven’t corrected properly. Fat removal surgery with laser lipolysis (laser liposuction) is a very popular application today and thus the efficiency of the liposuction has increased.

Which areas is 3D laser lipolysis (Liposuction) applied on?

Fat removal surgery with laser lipolysis is applied to all areas where fat excesses are regionally present. However, fat removal surgery with laser lipolysis should be avoided applying so much in the inner legs. In order not to affect the lymphatic circulation in the inner legs, it is less applied to this area in a controlled manner.

When Can We Start Sports after Fat Removal Surgery (Laser Lipolysis Surgery)?